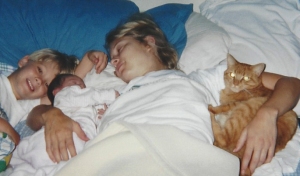 This is Pumpkin, along with 6 year old Isaac and newborn Liv. I am the giant in the middle. We often called Pumpkin “Kitty” because when you said KittyKittyKittyKittyKitty in a relatively high voice, she would nearly always come. Jeremy surprised Isaac and me with Kitty back in 1998 while living in Merrillville, IN. Isaac was almost 4 and Kitty was 7 months. Upon meeting her for the first time, Isaac responded, “I wike that wittle kitty cat.” Thankfully we have the moment on video.

At the time we lived in an apartment with a long hallway, the family room and kitchen on one end and the master bedroom on the other. Twice a day, for about half an hour each time, she would play by running back and forth. Back and forth. Back and forth. Often she would run to one end with me at the other and not return. Sometimes this meant playtime had ended. But every so often, just when I assumed she had settled down, Kitty would burst back into the room and then just as quickly run away. The routine burned kitty energy and greatly entertained me.

We were in Indiana less than a year when we moved to the Chicago area. Liv was born about a year or so after our move. Kitty accepted her immediately, I assume since she was still able to keep her place on our bed. As you can see in the above photo, she liked to curl up on my side of the bed between me and the bed’s edge. (Thankfully I didn’t have twins. Otherwise resentment might have occurred.) Kitty not only accepted Liv but seemed to carry a sense of responsibility for her. We would often find her curled up in Liv’s crib on the opposite end of where Liv slept. I don’t think Kitty wanted to be in reach but seemed to want to keep an eye on her. She would leave as soon as one of us would arrive, as if to say “Your turn.” Kitty also tolerated behavior from Liv that she has never tolerated from anyone else. Normally if someone got too close, particularly young children, Kitty would run and hide. But on multiple occasions, Kitty let Liv carry her around, upside down no less. As Toddler Liv walked by with Kitty in her arms, Kitty would look at me but never struggle to get free.

For 17 years Kitty has slept by my side. 17 years. 17 fucking years. While the family certainly loved her, I think I gave her a sense of belonging. I interacted with her frequently throughout each day, and when it was time to go to bed she would be by my side. She would either be sleeping in her spot waiting for me or she would arrive shortly after I got in bed. If she didn’t show up within minutes, I would go looking for her, often finding her locked on the porch or garage. When away from home, I would struggle to sleep without her next to me. It was just part of settling in, a routine of having her there next to me.

Up until two months ago, people could not believe her age. She seemed significantly younger in appearance and activity. But her age finally caught up with her. In the final few weeks, I watched as she lost weight and energy. She became increasingly unable to get comfortable. She would hide for hours at a time. Eventually she gave up eating. Her back legs began to give out. I would find her laying by the water bowl, either without energy to leave or an unwillingness to have to make the inevitable trip back. And yet she continued to sleep by my side… until her last night with us. She no longer belonged. She couldn’t belong anymore. I needed to let her go. It was time.

I sat in the vet’s office saying my goodbye. As her sedative was kicking in, my memories flooded back. I wasn’t just saying goodbye to Kitty. I was saying goodbye to a lifetime. Isaac doesn’t remember life before Kitty and for Liv, there was no life before Kitty. I tried to be strong for Kitty so that she would drift off into deep sleep hearing my comforting voice. But I couldn’t do it. What she heard instead was my shaky, raspy voice. What she felt were my tears streaming off of my face and onto her fur. She didn’t get a pillar of strength to lean upon. Instead she got someone feeling a little lost herself. I couldn’t be strong, but I could be there. I was where I belonged, by her side. Just as she had been for me, so many times and in so many ways.

We have lost three pets in three months. While all three were older and we could say had lived full, long lives, there never is a good time to say goodbye. As I look now over at my very old black labrador sleeping on her pillow nearby, I am comforted by this. I might still whisper, “Don’t go, not yet.” But as with Kitty, I would never want her to linger and suffer for my sake. Goodbyes are hard. Watching suffering is harder. Godspeed, Pumpkin Kitty. My life is richer because of you. 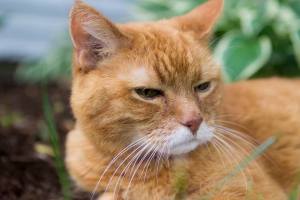