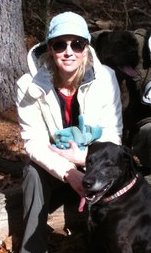 About a year after we got our beloved Lucy, we traveled from Pennsylvania to Michigan. Jeremy had work where his extended family lived, so we packed up the car, Lucy included, and traveled 650 miles for our week away from home. Although his parents were in Arizona for the winter, we stayed at their house which was on a lake. While Jeremy worked, the kids and I enjoyed the beautiful setting. We walked and explored and relaxed. Ice was still on the surface of much of the lake, but we knew that it was thinning.  I repeatedly warned my eight year old son, Isaac, that he could not walk on the frozen lake because it might not be able to hold his weight.

A few days into our vacation, with Jeremy not vacationing but rather away and working, the kids and I ventured outside with Lucy. Isaac was looking for anything to pick up, throw, or pull apart.  Liv, who was not quite two, was by my side and barely able to walk with all the clothing I had on her to keep her warm.  While in the midst of our exploration, I heard a sound that didn’t register. I looked around and on the lake about 20 feet from shore was Lucy. The sound that I had heard was her paws navigating the ice as she slipped and jumped and played. As I opened my mouth to angrily call her back to shore, the ice broke and she went completely under water.  Her head came up and she placed her front paws on the ice’s edge.  She attempted to pull herself up, but couldn’t get her front legs high enough to pull her back legs out and onto the ice. The kids were silent. My mind raced.

Lucy attempted a second time, a third time, and a fourth time but failed.  With each attempt I could see ice breaking and her getting weaker. By this point I was using my most upbeat, I’m-not-freaking-out voice to call her. “Come on, girl! You can do it! Come on, Lucy! You got this! Come on now!” While yelling, I was also thinking, “My dog can NOT die with the kids here to watch.” Seriously. I clearly remember thinking that her drowning in that lake on that day was something I could not allow. I think this refusal to stand by and watch was my mind’s way of pushing me forward into action. I made a decision in that moment that I would do everything I could to get that dog out of the water alive. I was cognizant enough to know that I couldn’t put my life in danger, but there had to be more I could do.

And so I formulated my back up plan while I continued to call for her. I figured the water was maybe 5 to 6 feet deep where she was. I would send Isaac with Liv to the neighbor’s house to get help. Meanwhile I would run to the garage and grab some rope, tie one end to the fishing boat on the shore nearby with the other end tied around my waist. This would enable me to walk to her with some connection to shore. I had unsettling images in my head of her slipping under and beyond the ice’s opening and my trying to get her. I kept planning and calling for her and planning and calling for her while keeping an eye on my kids. Isaac was now calling her too while Liv silently watched by his side.

Lucy continued to try to get herself out of the water, but she was pausing longer in between tries. She wasn’t pulling herself up as high. I thought, “This is it. Either she gets it this time or she’s giving up.” I called her with every ounce of my being knowing that my next move would be a sprint to the garage while yelling instructions to Isaac to take Liv next door. And finally, miraculously, Lucy did it. She got her front paws far enough onto the ice that she was able to just barely get one back paw up as well. She scooted herself forward and eventually got the other back leg up. She crawled to the shore’s edge and collapsed once she reached us. We wrapped her in towels and I carried her to warmth. The kids were thrilled. I sat down and wept. All the emotion, the intensity, the fear, the near loss, the what if’s overwhelmed me and I shook uncontrollably as I cried.  My kids stared, unsure of why I was crying since Lucy was now safe.  I could see their alarm as I kept crying, but I couldn’t stop. I cried until I had nothing left.

When Jeremy returned later that day, we told him what happened. He scolded me for even considering going onto the lake to get her. But as I think back, I am quite sure that while I would not have done something stupid, I would have tried whatever was reasonably possible to get her safely back to shore. In this near tragedy, I learned that I am able to stay calm and be proactive in a crisis, and a complete wreck afterwards. I learned that miracles do happen. I learned that love can be painful, because even the thought of loss hurts like hell. I learned that my kids come first, but my pets are a close second. I learned that dogs need to be told to stay off the ice just as much as eight year olds do. And I learned that a good, hard, shoulder-shaking cry is cathartic. I was crazy mad at Lucy that day, but even still I’d have to say she’s the perfect dog.